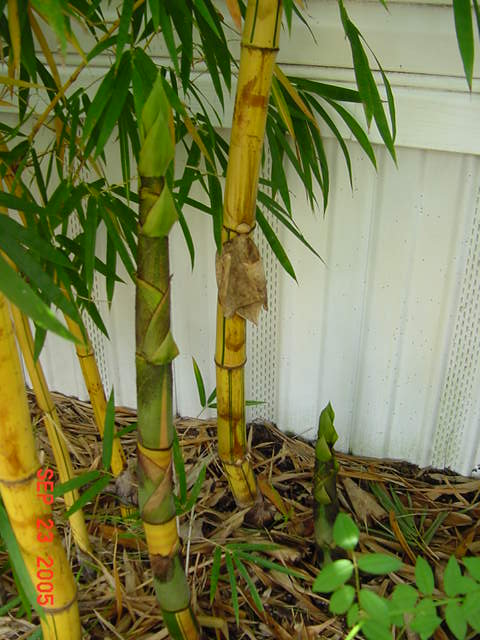 Well obviously I’ve named this site Bamboo Propagation Info, so it’s only fitting that the information contained here should be about bamboo propagation. Today’s topic of discussion is how to propagate clumping bamboo.

Unlike running bamboos that have rhizomes that spread far and wide, a clumping bamboo’s rhizomes stay close to the main plant, intertwining with each other to form a huge mass of roots. Depending on the variety, this root mass can go several feet underground as well. It is from this that the new shoots develop and eventually shot skywards.

Now, this being said, one of the easiest ways to propagate a clumping bamboo is through division. This simply involves digging one or two culms from the parent plant then either potting it up or putting it directly in a new spot in your yard. If you are looking to develop a bamboo screen then this is by far the easiest and most inexpensive way to do it. As shown in my clumping bamboo propagation video, this is easily accomplished using a sawzall and shovel, though if the rhizome mass is deep and hardy a heavy duty prybar may be needed.

A second method to propagate clumping bamboo is through culm cuttings. This involves selecting a culm that is usually two to three years old then cutting it into pieces. Almost all the existing branching is trimmed off except for one or two small small ones and then the cuttings are buried in pots past the node. New roots will develop from the area where the branches are attached to culm in as little as a few weeks to several month. Success rates vary with this method, and variables include time of year taken, type of bamboo, what part of the culm the cutting came from, and of course how well the cuttings are cared for. I usually place my cuttings in the shade, keeping them moist but not soaked as well as keeping the open end of the cutting filled with water. It’s also said that putting them under mist propagation will increase success rates, but I’ve yet to try this. A variation of this involves using two node cuttings, where a hole is drilled into the area between nodes to fill it with water and sometimes a mild rooting hormone. This hole is then plugged and the entire cutting buried, leaving only the branches and leaves exposed. I’ve yet to try this either.

A third method used to propagate clumping bamboo involves whole culm burial. Just as the name sounds, this is where an entire culm is cut from the parent plant, and is similar to double node cuttings. Branching is once again trimmed at each node before burying the culm under ground, ensuring that some of the branching stays above ground level. Once new shoots have developed the culm can be divided into individual plants and either potted up or transplanted elsewhere in your yard. Personal experience shows this works well with many of the Multiplex varieties. A variation of this involves gently smashing the culm close to the ground, then bending it over and burying each node with in a pot filled with dirt. I’ve yet to try this method, but it is on the list of experiments to try.

A fourth method for propagating clumping bamboo involves air layering. This simply involves scoring the area around the culm node, then placing something around the node to hold a potting medium in place, usually peat moss or coconut coir. The potting medium is kept damp and over the course of several weeks the node will develop roots. Once enough roots have developed the culm can be cut and voila, you have a new bamboo plant! I have heard that this works well with many Dendrocalamus species but I have yet to try this either.

Of course the final method is to grow bamboo from seed, but where most bamboos flower once every 60 to 100 years, the chances of getting your hands on bamboo seed can be pretty slim. Best to stick to one of the four other bamboo propagation methods listed above. For all of the above listed methods I will be putting together both picture and video tutorials as I perform them in the coming months.